Rules allow each device on the CFLink network to perform actions based on string matching of outgoing data on the CFLink bus.
For example, you can create a rule that when a specific dry contact on a SW16 is closed, a custom macro is triggered.

A rule is defined with a name, search string and a macro to trigger.

A Macro is defined with a name and a series of actions and delays.

The rules tab within System Commander allows you to create and add macros and rules to be run on your device. This tab is identical across all CommandFusion hardware that supports our Rules Engine. 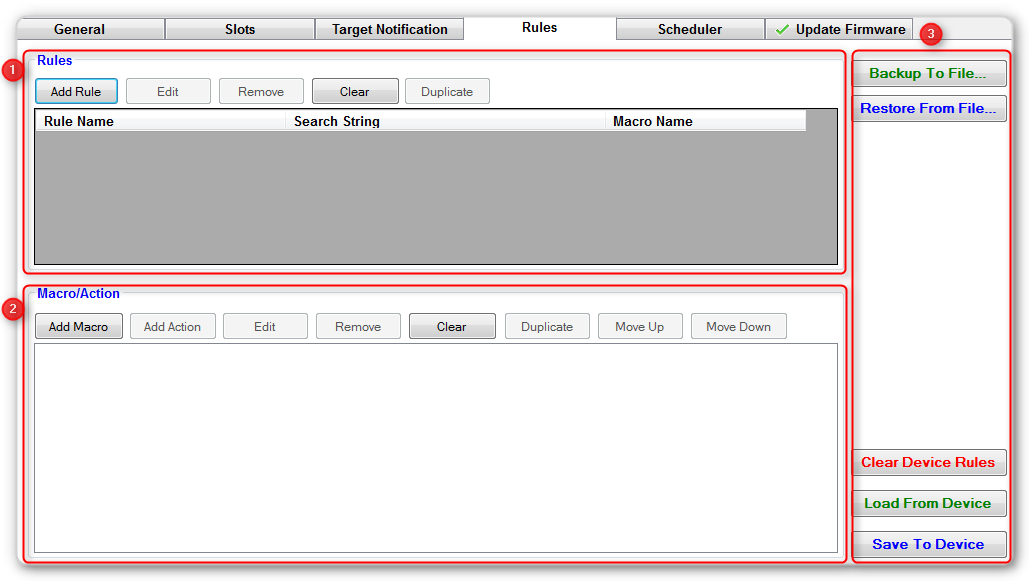 A detailed explanation of how to program macros and rules can be found in our System Commander Quick Start Guide here.

A rule watches for a specific event, then runs a macro when that event occurs.

A macro must always be created first, as a rule will trigger a macro. A macro is a pre-defined set of actions to be run when triggered by a rule.

This button allows you to choose a locally stored backup file to load macros/rules onto the current device.

Loads the rules and macros currently stored on the device and shows them in System Commander.

Saves all changes made to the device.

For details on the CFLink protocol used to create and delete rules, please see the Rules Protocol wiki entry.